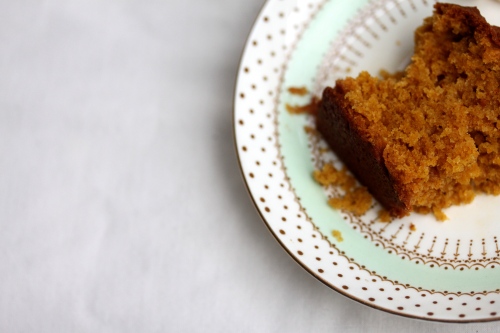 You were almost hoping this would really be a bread recipe, right? Just a bit of bread dough with a bit of pumpkin puree folded in, yay, some healthy stuff for once. Are you kidding? Everything is healthy. It just depends on your attitude towards it, and in what quantities you consume it. Bring on the cake. Guilt? I don’t even know guilt feels like. Is it edible? Whatever, lets go back to pumpkin bread shall we? Why do people call cake in the shape of a loaf “bread”? Is it to calm their conscience? Back home, in a land far far away, also known as Switzerland, we call them loaf-shaped things Cake. The round ones are called Kuchen, and if they have some sort of custardy whipped component, they go over into the Torte realm. That’s a bit of trivia you can totally stun people with at the next dinner party. Bam!

In other words, this is a deliciously aromatic, sweetly spiced pumpkin bread. Great on its own, toasted, or with a smear of sour cream. Because you’re worth it baby. 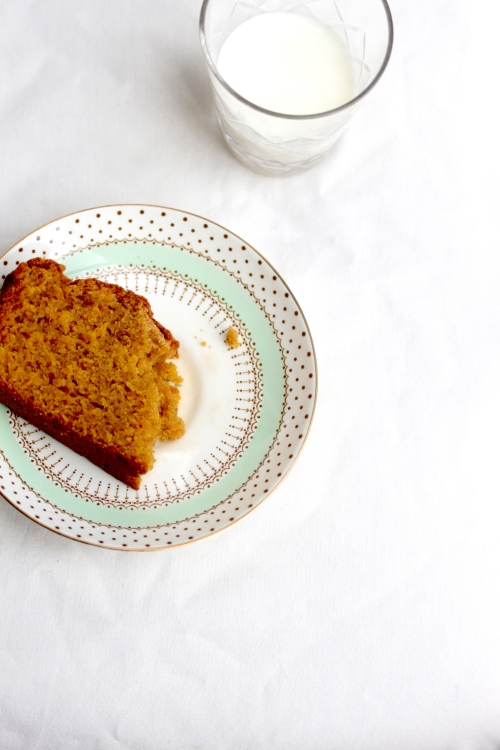 Chuck the pumpkin onto a lined baking dish, dot over the butter and bake in a preheated oven for about 30 minutes at 200°C or until soft. Remove from the oven and cool. Once it’s cool enough to touch, whizz it to a smooth puree in your food processor. You will need one cup/250ml of this. Do something imaginative with the rest, or just eat it. Whatever mood hits you first.

Lower the oven temperature to 180°C. In a large bowl, combine the flour, sugar, baking powder, spices and salt.

In another bowl, possibly the one you melted the butter in, stir together the butter, golden syrup and vanilla. Whisk in the egg, then add the cup of pumpkin puree.

Pour the liquid pumpkin mixture into the flour mixture and gently combine. Don’t over mix it – it’s fine if you have a few bits of flour lurking about. The process is basically the same as that of a muffin. Spoon into a prepared loaf tin and bake it for about 1 hour, until a skewer inserted comes out clean and the top is nice and golden. Mind, our oven is extremely temperamental, so just keep an eye on your little loaf and periodically check after 50 minutes.