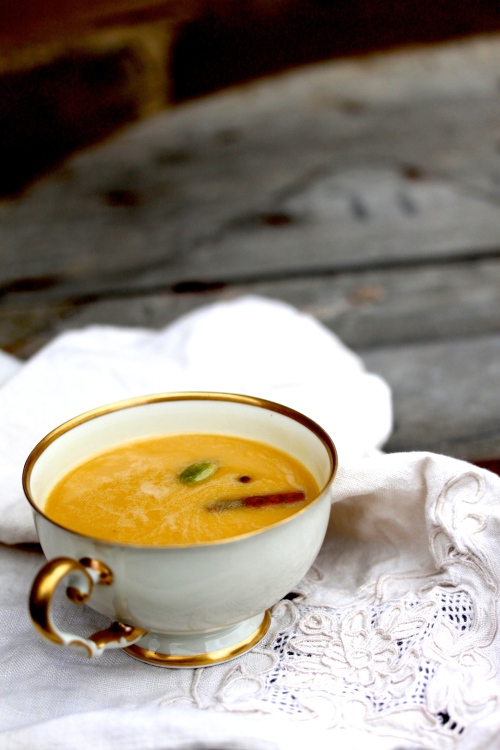 It’s time, guys. Spring’s here. Jasmine bushes are exploding all over the place, sunscreen is taking the place of cologne and we can finally leave the house without a scarf. Oh how I love spring. To bid my farewell to winter, and helping you lovelies on the other side of the world ease into the realization the cold is going to come get you, I present to thee: Hot buttered rum.

The inspiration for this recipe came from a visit to this charming little bar down the road called Little Mess. If you’re ever in Brunswick, give it a go. They won’t be doing hot buttered rum till winter though. A few months back, when I asked about the ingredients that made up the delicious steaming beverage I was holding between my frozen paws, I was expecting something along the lines of “Ah, sorry. Secret recipe.” Which I did. But my disappointment must have guilt-tripped the friendly barman, so he ended up giving me a tiny insight into a short and incredibly vague list of ingredients make up the magic of which is hot buttered rum. So eagerly I went on home and over the following months taste-tested my own interpretation of it until I was certain that it had well and truly ticked all the boxes. May I present to you, a caramelly, buttery, spiced cup of sweet boozy goodness.

Now ideally, try and get this first step done at least 15 minutes before you serve your drink. That way, the spices have a chance to develop and let themselves be noticed. Combine the butterscotch, water and spices in a heatproof mug and heat in the microwave for 30 seconds. If you hate microwaves, or just don’t have one, warm the mixture in a small pan until hot, but not boiling. Set aside for 15 minutes.

When ready to serve, add the rum to the cup and heat for a further 30 seconds in the microwave, until nice and hot, but again, not boiling. You, my sweet, are now ready to drink.

Makes enough for at least 5 drinks

Combine all ingredients in a saucepan and stirring, bring to the boil. Let it bubble away for about 5 more minutes until thickened slightly. Take from the heat and let it cool.

Can be sored for at least one week in the fridge.