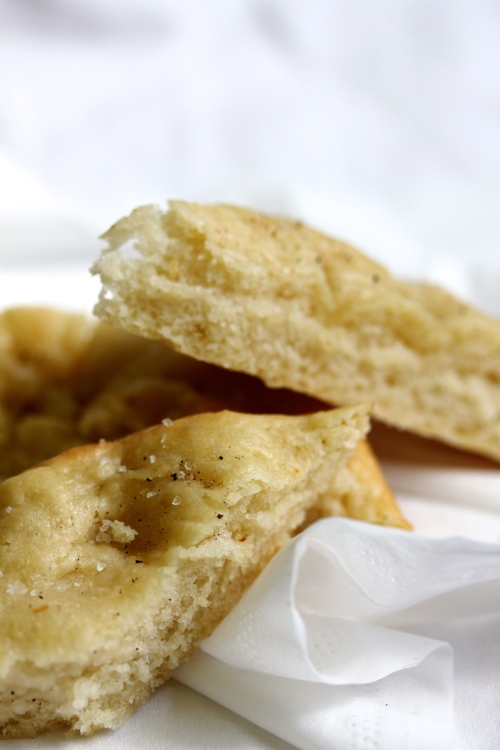 So um, hey. If I invited you over for dinner, would you say yes? Feel the pressure. Of course you would. I’d spoil you rotten you know that. So if you asked me what you could bring, chances are that if it’s not a bottle of wine, then something to dip with. Because you know me well enough that there will always be dip. That’s how I roll. Now, corn chips or crackers or crisps may be your first choice, and I understand that. But if you’re feeling a little creative, and think of making your own dipping utensils, then baby, you can come again. I’m sure you’ve got your own special cracker/flatbread recipe, which I’ll be more than delighted to taste, but for now, this is what I would make if you were inviting me. And I’ll bring a bottle of shiraz too, just in case.

This is my go-to dough for pizza and focaccia. Often I just top it with some sea salt flakes and a drizzle of olive oil, but I’ve been also known to infuse the oil with garlic, or scatter some fresh rosemary over the top.

Plonk the flour in a bowl and make a well in the middle. Pour in the warm water, and sprinkle the rest of the ingredients over it, including the oil. Stir with a butter knife until roughly combined, then give it a go with your hands, until it comes together and gets that soft and elastic feel. Oil the bottom of the bowl you’ve just used and turn the dough in it. Now cover with cling wrap or a damp towel and place somewhere warm for an hour. Once it’s risen to twice its size, give it a little punching action and transfer it to an oiled baking tray, rolling it as thin or as thick as you like. Ideally now, you cover it again and let it rest for about 20 minutes. I’m usually too impatient and only let it get about 10. Then, once it’s risen again slightly, gently dimple the risen dough back down with your fingers. This is where you can top your focaccia.Olive oil, maybe some halved cherry tomatoes or a scatteing of parmesan. Now place the tray in the oven and bake at 200°C for 20 minutes. After it’s done, drizzle with some more olive oil and cut into wedges.