Ah life. It is all quite vague and unclear at times, especially mornings. All of that “Why am I up? Should I eat or go back to sleep? And if I did choose to eat, what other than chocolate is there to choose from? Or indeed go for a run or dedicate more time to hating your neighbours because they’re up at six renovating again?” – business.

What is not unclear though, not in the least, is the incredible awesomeness of these little triangular parcels of tasty goodness. Ever feel as if that spinach and cheese triangle you’ve just bitten into hasn’t quite reached it’s full potential? Like not even near it? There has got to be more to it than that hot wet lump of mossy cardboard, really. Or is that what is to be expected? Don’t let them lower your triangular standards, never. There is so much deliciousness out there, and I have taken it upon myself to find it for you. I know. After all these years of suffering I come forth and save your taste buds’ world again – disgustingly romantic really.

Without further ado, I introduce you to my latest fling, the seductive herb, spinach, and cheese triangle.  What clearly defines its unmistakable tastiness is the combination of parsley, dill, coriander, mint and spring onions, as well as the spinach. The bland ricotta is replaced with some creamy Philadelphia, rounded off with a hint of cinnamon and cardamom.  Sound good? I know. Go on lover, go impress someone with these. 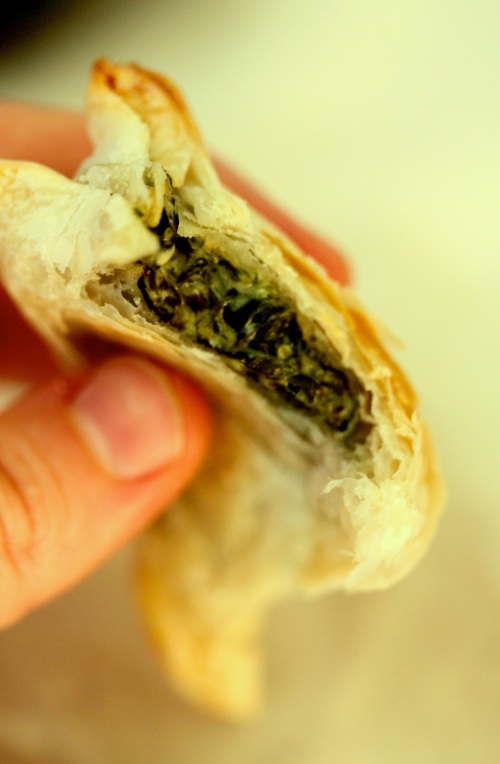 2 Tbsp each butter and olive oil

2 cups (one of those massive bunches you can get these days) parsley, finely chopped

a big pinch of chilli

about 4 sheets of frozen puff pastry

Melt the butter with the oil in a large fry pan over medium heat. Add the spring onions and cook till softened. Next comes the spinach. Give it a bit of a stir for a few minutes until it’s wilted, and there’s enough space to add the rest of the herbs. Give them about 5 minutes, before adding the soy, stock powder, chilli, cinnamon, cardamom and cream cheese. Reduce the heat to low and stir continuously, until the cream cheese is nicely incorporated into the mixture. Done! Now, let it cool.

In the meantime, Preheat the oven to 220°C and take out your frozen puff pastry to let it thaw. Working with one sheet at a time, cut it into nine equal squares. Place a scant tablespoon of filling on each, fold over a corner and seal by pinching the edges together, so that you’re left with a pretty little triangle. Continue with the rest until all the mixture’s used up. Place the lovelies on a prepared baking tray and bake for 10-15 minutes until golden.